Shy Lee was pulled from Gordon County  when she was 4 months old. She was a feral puppy on someone’s property and could not be tamed. The staff had decided to euthanize her because she was so terrified that she would try to hide in the corner of her pen 24/7.

Our rescue took a chance with her and gave her the opportunity to get learn to be around humans. For the first 2 weeks Shy Lee stayed behind a toilet, thinking she was well hidden.  She would freeze when anyone approached the bathroom. Over time she did adapt to living indoors, but she still did not want any human interaction unless she was cornered and forced to interact.

Shy Lee slipped out the door one day and could not be caught. She adjusted to outdoor life and living on the property. She has become a major part of the rescue.  Shy Lee and Dexter are the first two dogs to greet new arrivals. They seem to make the new dogs feel more comfortable and welcomed.

Shy Lee is a natural born motherly type girl. She has been spayed, but she still loves to mother all the new puppies that come through the rescue.  Shy Lee takes time with each puppy and attempts to show them the ropes of socializing with other dogs. She commits herself to every litter.  When they are outdoors she stays close and watches over them!

Shy Lee has lived with the recue for almost 4 years. During these years, she has never been the lovable trusting type girl.  If she does allow me touch her, she will lay down on her side and tighten her whole body into a ball closing her eyes as I pet her. She has very little trust in humans.

In December 2016 Shy Lee was involved in a horrible accident. The vet and we think she was either attacked by a buck or she was hit by a hog’s tusk. Either way she suffered a major injury to her abdomen and side. I found Shy Lee hiding under a parked car. I could tell she was injured, and she knew she had to accept my help.  I carefully got her out from under the car and rushed her to the vet.  She received emergency care.  All along she was fearful of the multiple people handling her, but she accepted the help without one complaint or attempt to escape.

It took a couple of months for Shy Lee to heal. During this time she lived indoors and was crate trained.  She had to be handled daily to cleanse her wounds and apply medication.  She was not excited about the process, but she adapted and allowed herself to trust people to care for her.

Shy Lee has become the most friendly, loving, and affectionate girl since her accident. She realizes how well she has it here and enjoys helping the new arrivals adapt and feel comfortable by welcoming each and every one of them!

Alley is 6 year old mixed breed female.  She came from Murray County Animal Control as a tiny puppy. She was feral at birth and never accepted socializing with humans.

Alley was kept in a boarding situation for the first 6 months of her life. She was spayed, microchipped, and vaccinated while in boarding.  She then went to a foster home that was located in the country. When she arrived at her new foster home, she was accidently let out of her crate and was not able to be caught.

She remained loose on the property for 3 years wandering as she pleased, chasing cars, and causing problems with the neighbors. Eventually Animal Control in Lumpkin County trapped her and sent her to the shelter!

The original rescue was contacted (thanks to microchipping).  At the time, I assisted the rescue and Alley was brought to my kennels. To this day Alley does not allow herself to be touched. She stays out of reach of people but will go for walks and hangs out close by if we are outdoors.  She still goes into hiding when strangers are around. Alley gets along well with all the animals at the rescue; dogs, cats, horses.  She is part of the welcoming committee when new animals arrive.

NWGA K9 Rescue has a number of dogs who will most likely remain in our care for the remainder of their life. These dogs are considered "unadoptable" by most people. This is for various reasons such as fear of humans, no socialization, and medical problems.We would love to share their stories with you below. If you would like to assist the rescue in providing every day needs for these dogs who will always call us home, please donate by PayPal to nwgak9rescue@gmail.com and put the dog you would like to sponsor in the notes field. Thanks so much for your continued support!

Ashley and Ansley were pulled from Gordon County Animal Shelter in October of 2016. Both girls were brought in as strays. They had been feral for their whole life. They had no clue what human contact was about. They remained at the shelter for over a month, and due to no their lack of socialization the shelter staff reached out for help for these two who were going to be euthanized.

Ashley and Ansley can be handled if cornered, but they prefer doing their “own thing”. Their “own thing” consists of playing with other fosters, chewing on toys, going for romps in the woods and exploring the areas around them.

Both girls have great attitudes and will possibly be adoptable one day. Until the day arrives when they feel safe with other humans they are living here at the rescue and just taking it one day at a time. 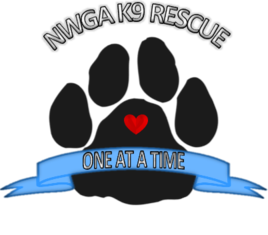 Dexter is a 5 year old Aussie mix that had a horrible start at life. As a puppy, he was dumped at Murray County Animal Shelter.  An out of town rescue pulled Dexter and numerous of other dogs. The dogs were placed in boarding, but the boarding facility turned out to not be what they claimed.

The dogs were housed several to a pen. This was regardless of sex, size, temperament, etc. The dogs who were really dominate were kept in airline crates and metal dog boxes. There were several heavy gauge covered chain link 6ftx4ft pens in a warehouse with no heat or air. The dogs only had air from opened doors and fans in the summer.

Being a young unaltered male, Dexter got into several fights in the overcrowded living conditions. The kennel staff decided to place him in an airline crate inside the metal building to prevent further problems.  They only removed him once a day to clean out his kennel, give him food and water, and then place him back into the crate. This went on every day for almost 8 months. He had no leash walks, no outdoor time, no love, no affection, and no exposure!

The rescue we were assisting at the time was contacted and we stepped in to help place all of the dogs into forever homes in Washington State. Several of the dogs required re-training. They were sent to a professional trainer and given refresher courses, or 3 weeks of board and train to help them become more adoptable dogs.

This did not work for poor Dexter. He was terrified. He went through the training course and was released back to us at the kennels. No amount of training could help Dexter overcome his fear of people or new things.

Over time he created his own bond with one of the staff. He would follow her around when in the play yard. When in his kennel, he would remain out of his dog house when she was cleaning his area, but always stayed beyond reach. As time went on, he finally allowed the staff member to start petting him. From there, he became a total love bug to this one person and became the official greeter of the Rescue along with Shy Lee!

Dexter will remain in our care for the remainder of his life. If you would like to sponsor Dexter to help fund his food, vetting, and other daily needs please donate via PayPal to nwgak9rescue@gmail.com and notate Dexter in the notes field.